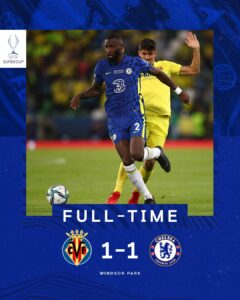 Villarreal overcame Manchester United in the final of the Europa League last term on penalties and will be searching for another victory over an English opponent to secure another crown.

Unai Emery’s men have not recorded a victory in pre-season so they’re in need of a positive display tonight ahead of their LaLiga opener against Granada on Monday. The club secured their first European honour in beating United, and they can kick off their term with a second by notching a victory over Chelsea. The Spanish outift will be up for the battle tonight.

Chelsea will look to kick off their competitive campaign with a victory in the Super Cup to add another trophy to their collection. The Blues were outstanding to win the Champions League final, beating rivals Manchester City 1-0 courtesy of Kai Havertz’s strike. Havertz along with Timo Werner will be looking to make a decisive impact tonight with Romelu Lukaku closing in on a Stamford Bridge return.

Thomas Tuchel will see the contest as perfect preparation for their Premier League opener against Crystal Palace on Saturday. He will be determined to sign off pre-season with a strong performance.