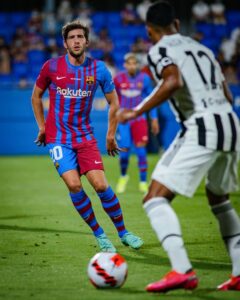 Video: Barcelona vs Juventus 3-0 – Highlights Download 08 August 2021 Club Friendly It’s been a turbulent week for Barcelona. On Thursday it was announced Lionel Messi would not sign a new contract with the club after financial issues at the Catalan side left them unable to pay the Argentinian’s wages. It’ll feel unnatural to see Barcelona without their iconic attacker, and today will offer us the first glimpse of a new era at the club.

This is Barcelona’s final friendly ahead of the new season (Juventus still have one more next weekend against Atalanta) as they begin their first campaign without Messi since his debut for the club in 2003.

Juventus, meanwhile, put out a strong lineup; even if most of their Italian stars from the Euros are only able to feature from the bench today.
Barcelona will at least have some new signings starting: Demir and Depay will be keen to provide some consolation to the fans today.