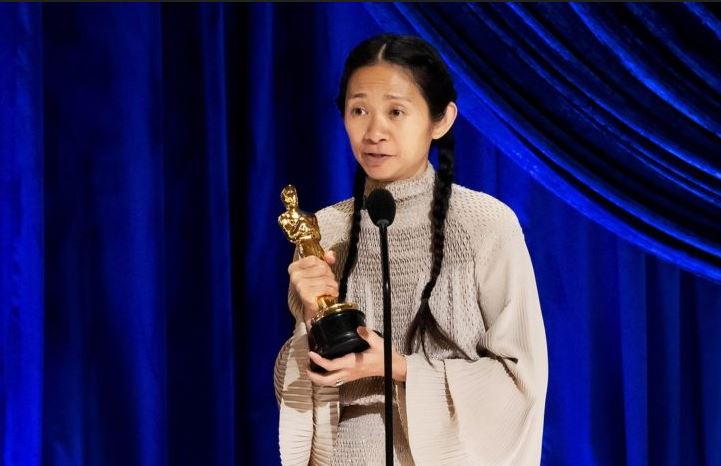 Chinese filmmaker, Chloé Zhao became the first woman of color and the second female woman in history to be named best director at this year’s Academy Awards in Los Angeles.

The 39-year-old won the Oscar on Sunday, April 25, for directing Nomadland. She was also the first woman to get four Oscar nominations in a single year, in the Best Film Editing, Best Adapted Screenplay, Best Director and Best Picture categories.

The prize was presented to her virtually by last year’s winner, Parasite’s Bong Joon-ho.

Receiving the award in Los Angeles, Zhao thanked the Academy, her fellow nominees, and her entire company on Nomadland.

She said she had been thinking a lot recently about ways to keep going when life is hard and remembered a game she played growing up in China with her father, memorising classic poems.

One phrase stuck with her in particular, she said: “People at birth are entirely good.”

“Those six letters had such a big impact on me,” Zhao continued, “and I still truly believe them even if it might seem the opposite.”

“This is for anyone who has the faith and courage to hold on to the goodness in themselves and in each other. This is for you; you inspire me to keep going.”

Born in Beijing, Zhao was educated in the UK and US as a teenager before moving permanently to America for college. Nomadland is her third film, following Songs My Brothers Taught Me (2015) and The Rider (2017). Out later this year will be Eternals, a Marvel superhero movie starring Angelina Jolie and Richard Madden.