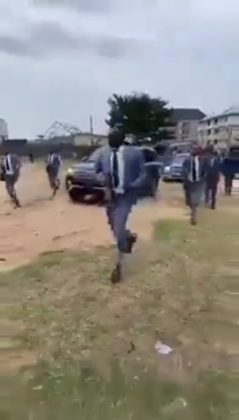 A pastor has caused a serious stir after storming his church with a long convoy and heavily armed escorts in Aba.

The incident happened during a crusade organized by the church.

The man of God identified as the head of Adoration Ministry in Owerri is spotted approaching his congregation as members jog on both sides of his vehicles while driving into the premises.

On getting to his stop, he was welcomed by a young girl who handed him a flower bouquet as she further sprinkled flower behind him as he walks into the gathering.

The incident has left social media users wondering what is actually the pastor’s real intent. Some wondered if he’s truly called by God.

Watch the video below …