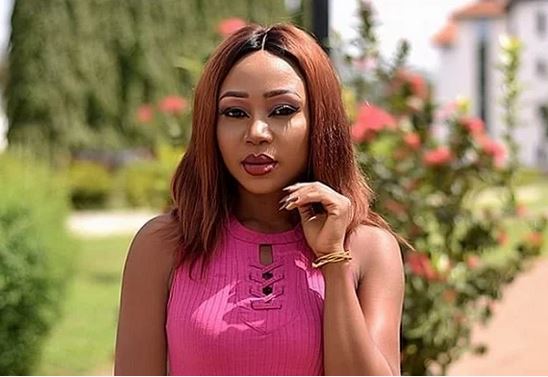 A popular Ghanaian actress, Akuapem Poloo, has been sentenced to three months in prison.

She was sentenced by the Circuit Court sitting in Accra for posting a nude photo with her son on social media.

According to BBC Pidgin, the court ruled on Friday that the actress, whose real name is Rosemond Alade Brown, would serve 90 days in jail concurrently.

It held that the development was imperative to serve as a deterrent to others in the country.

The court also disclosed that the result of a pregnancy test conducted on the movie star after her earlier conviction came out negative.

The film star was said to have broken down in tears shortly after the court’s verdict on the case.

Akuapem Poloo had ignited intense controversies in June last year after she shared a photo of herself completely unclad on the occasion of her son’s seventh birthday.

She, however, apologised amid the backlash while explaining that the photo was originally meant to encourage people to appreciate their mothers.

But Bright Appiah, the director of Child Rights International in Ghana, had demanded her prosecution in a petition leading to her invitation and arrest by the police.

She was thereafter arrested and charged with publication of obscene materials and engaging in domestic violence — a conduct that in any way undermines another person’s privacy or integrity.

The actress was also charged with engaging in domestic violence — a conduct which detracts or is likely to detract from another person’s dignity and worth as a human being.

When Akuapem Poloo was first arraigned, she pleaded not guilty to the three charges against her.

On Wednesday she, however, pleaded guilty to all the charges and was consequently convicted by Christina Cann, the presiding judge.